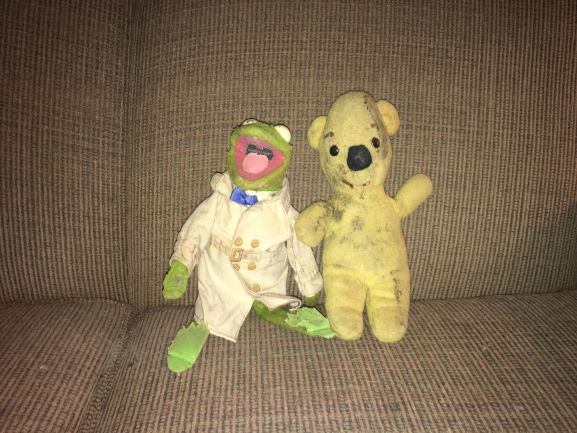 In my guest space here on Bob’s blog, I want to give you a lesson on how to nurture your inner child while you execute your bold, grown-up vision for your life.

I’ve got a deep connection with the Winnie the Pooh universe. As a kid, I saw myself as a stand-in for Christopher Robin amongst the Motley Crew of Piglet, Tigger, and Eeyore.

Let’s go way back. The very first toy anyone ever put in little Ryan’s crib when he was born was a Winnie the Pooh stuffed animal. Pooh, and a Kermit the Frog stuffed animal were the first toys I ever had as a child. And it did my heart so much good when my sister found them in storage in Alabama after many years of not knowing where they were.

I was scared they were gone forever.

They’re battered and bruised. Yet they’re still the same two guys that brought little Ryan so much safety as a child.

I recently saw Disney’s, Christopher Robin. And as much as I wanted to adore that film, I merely liked it. I mean, I wanted to cry so much – but I never really did.

It’s the story of an adult Christopher Robin, some 30 years or so after leaving the Hundred-Acre Wood. Leaving behind the security of Roo, Kanga, Owl, and Rabbit.
And an anthropomorphic teddy bear with a tapeworm, apparently.

The film is beautifully shot. The CGI characters are impeccable. I mean, Pooh even had some dirt in his fur not unlike my beloved Pooh bear.

Jim Cummings reprises his voice role as Pooh and Tigger (and they even brought out the song for Tigger!) Brad Garrett was inspired casting as Eeyore!
And I’d be remiss if I didn’t give a shoutout to Ewan Macgregor as Christopher Robin. He really turns in a solid performance.

Christopher Robin is about a man who rediscovers what made him great, by balancing his childlike sense of wonder, and his adult sensibilities.

I’m a man with a big voice in the world. I’m a coach. I’m an author. I’m a weekly contributor to a major men’s web magazine (goodmenproject.com.) I’m a podcaster. And I’m a King.

I’m not 100% sure of the demographics of Bob’s blog. I’m assuming that his readers are all over the age of 10. Therefore, I’m going to speak to you as people for whom the age of ten is past tense.
When I was 10, I was a big dreamer. I had an imagination that would stun people. And certain people fed right into that.

My grandfather was one of those people.

Melborn Ivey was an award-winning farmer in Southeast Alabama. He primarily grew peanuts and raised certified Angus cattle. He was a veteran of the South Pacific, receiving the Purple Heart after being wounded in the Battle of Guadalcanal.

Even though he’s been gone over a quarter century, he’s still my greatest hero.

One sweltering night in July of 1987, Granddaddy was angry. A patch of peanuts had died, and he suspected that he had an irrigation rig going bad.

As we were waiting, we noticed that a ton of fireflies (or lightning bugs as we call them in Alabama) were out that night. Granddaddy had me so convinced that those fireflies were a race of alien monkeys set to sabotage irrigation equipment, I turned that into my very first short story called Monkeytown.

That night planted the seed that matured in 2015. That was when I published my debut novel – Written in the Stone (available on a little up and coming website called amazon.com.)

Leaving childhood behind is a sure-fire way to forget who we really are.

There’s a pretty poignant moment in the film between Christopher Robin and his wife. As she sees him further forgetting where he came from, she essentially told him “you’re not the man I fell in love with.”

If I can leave you with one lesson, let it be this. In pursuit of adult dreams, don’t forget your inner child. All he or she needs is a little love.

My inner child – or my inner Prince as I call him – is deeply loving, creative, imaginative, and hilarious.
But he also tends to get scared easily and he keeps grown man me from being the powerful adult I know I am.

Don’t forget to play! Take your significant other (or yourself) out on dates. Get that old video game system back out. And go back to the Hundred-Acre wood every now and again.

Oh, and make sure the honey you buy is organic. You wouldn’t want that silly old bear to get a rumbly in his tumbly.